December 9th my wife and I went to the most amazing concert I’ve ever been to (and I’ve been to dozens) at an intimate venue called the Kung Fu Necktie. All Jewish performers and I’d estimate 90% or more Jewish fans from nearly all branches of the Judaic tree, 100% respect and love. We were standing right in front of the stage, elbow to elbow, back to the front of one another, and still, the energy, the vibe, and the good spirits were palpable the whole evening. Everyone was jumping, swaying, waving their hands, dancing, having a great time, and my wife and I will never forget the evening.

I’m of course talking about the Nissim Black bright lights tour, and if it’s in your city and you don’t go, I genuinely feel bad for the opportunity you’re missing. Westside Gravy, who we’d never heard of until then, came on strong, high-energy, lyrics flowing free and tight and amazing music… seeing him live made fans of us, and I’ve been listening to him on Youtube nonstop since. Next up was Kosha Dillz and oh… my… his set was amazing, his energy and abilities to rock the crowd was above and beyond any and all expectations… and we were fans of his before that night.

Westside Gravy and Kosha Dillz already had the crowd hype, jamming, and next up was Nissim Black!

Nissim Black has been my favorite artist for a long time now, so when he took to the stage it was incredible, especially that we were so close. Nissim performed every one of my favorite tracks by him, including the new song for Hanukkah with Kosha Dillz. He was witty, energetic, had a great stage presence, and was highly charismatic on stage, keeping the audience smiling and having an amazing time. Nissim Black didn’t miss a beat, nor a step during the performance, even though the venue was hotter than a Wawa coffee with the small venue and throngs of people. Nissim did not disappoint!

If you have a chance to see any of these artists live, do yourself a favor and go… don’t even think about it, just go grab tickets and go!

My wife and I sprang for VIP tickets and got to go backstage after the concert and meet Nissim Black in person and talk a bit, plus got signed photos/mini posters. He is a super nice guy, even when my wife forgot and reached out to shake his hand (He’s Hasidic Jewish) and both he and I gasped, he was super nice in his refusal. I explained it to my wife before but she’s newer than me along the path to conversion (Never met a Hasidic Jew before) and forgot for a moment.

He was so kind, as was Kosha Dillz and Westside Gravy, and honestly, it was my wife and my first date in our 11 years together due to having kids with special needs. We got there early and went out to dinner (Chicken Milanese for the win) before the show, coupled with an amazing concert and meeting Nissim afterward… the night was magical, to say the least!

Here are some pictures from the show, along with my signed photo which he made out “To his PR guy” because of me getting so many via social media hype for the show 🙂 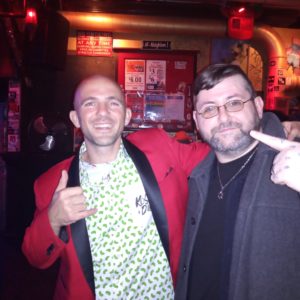 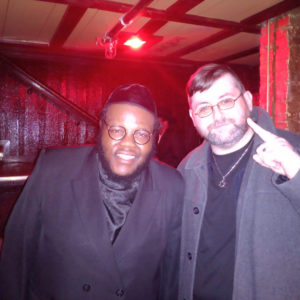 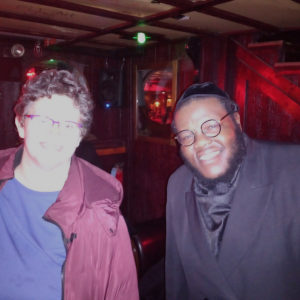 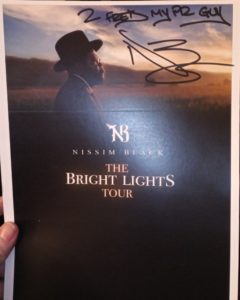