I’m often asked why I speak out about my past so freely and openly, if it’s healing to me, or if it’s hard for me, so I felt the need to address it here in a brief article. Speaking out, writing on my past, having speaking engagements and the like offer me a chance to help arm others with the knowledge I’ve learned from being a part of the movement. Yes, it is healing, not just to me, but to the world (Tikkun Olam) as the more the information and truth are spread, the more we can combat extremism, hatred, and division.

Once I was reprogrammed, dissected, and debunked the ideology, began making from off all stripes etc… I made a pact with myself to be a beacon of change and hope and to actively fight against who I was in the past. This was long before I’d decided to convert to Judaism or even knew much about it, and this has only doubled since finding my Jewish ancestry and going through conversion. Academics, government agencies, the media, and the general public at large know very little about the inner workings of extremism, much of it tantamount to speculation, and when they know just a sliver they ascertained from a grunt in the movement, they profess it as an “AHA,” moment and believe it’s all figured out.

Only a handful of organizations and people who were former leaders in the extremist movements, actually can and do put out valuable information to genuinely fight the good fight. I’m an open book, ask and I’ll tell you… I’m this way to help defeat those who took up the mantle of “extremist,” since I’d left. I’m open also because I want friends and people I come to know, to not be surprised by anything they might find out about me if they’d dug around.

I speak out to help make the world a better, kinder place for my children and their children’s futures and for all of our generations to come. I speak out to help heal the hurt I’d caused in the past, to be a positive influence on my kids, and to show others that people can change, to not give up on the power of human empathy and rationale. 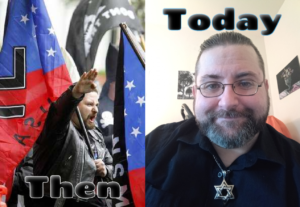