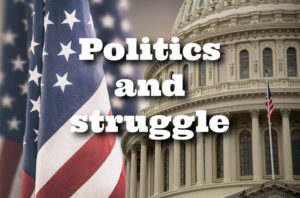 My past was once dominated by politics, which eventually led me down a very dark path in my life. Everything was seen as a struggle against diametrically opposed forces who were out to get everything that is right and good. Politics tends to bring out the worse in human beings, from division to all-out hatred, politics is a seething beast. I had a very far-right narrative in my past and while many who leave that life often just go far-left, I turned apolitical. I don’t care about political parties, elections, or the politics of any politician, what I care about are human rights being protected, things that move us all closer to equity, and anything that benefits humanity; nothing more and nothing less!

I don’t read or watch partisan news such as CNN or Fox in regards to politics, I don’t debate people because most are indoctrinated and hold strong cognitive dissonance in regards to that indoctrination. Neither the right nor left, republican or democrat hold all of the answers, not a single politician holds all of the answers and if you find yourself saying they do, congratulations, you’re officially indoctrinated.

Our struggle as the human race is to see that all people are free, equal and that we’re alleviating human suffering, not that our party or our politician wins. Trust me when I say to you that no political party or lifetime politician gives an iota of thought to you, your family, or those in your community… not one. They all have a hidden agenda, which when they win by telling you all of the things you want to hear, they will enact. They all say one thing and do another, oftentimes doing the exact opposite of what was promised while they were trying to get your vote.

Politics and struggle go hand in hand, hence Adolf Hitler’s book “Mein Kampf,” meaning “My struggle.” Politicians and political figures are always one step away from pushing the metaphorical button and hurting all of us in some capacity. The extremists on both sides are always one step away from committing some form of atrocity on innocent people they perceive as enemy combatants. This partisan way of thinking is not sustainable, it is not helpful to humanity or the human condition. People need to stop being republicans and democrats, right, or left, stop identity politics, and start being decent human beings to each other again.

To most, politics is a pastime, no different from sports, they pick a team, have star players, and when their team does something foul they ignore it while shouting about everything foul with the other team. This is why I am apolitical and a centrist, because I don’t stand by political parties, I stand by the people and only the people. This partisan way of thinking is exactly how the Nazis took power and committed genocide upon millions of Jews. The right/left paradigm is a sham, it’s an illusion, one party says they want to do something and the opposing side screams and moans about it, that is until their party comes to power and does the exact same thing. Both sides have equal but opposite modes of extremism as well, which targets everyone they “think,” is opposition, but generally speaking are innocent people.

When I think of politics and struggle, I think of the struggle to find something meaningful to assist human beings, devoid of parties, and often times I think of the struggle to get away from politics and the effects it has on people. Remember, if you’re not a republican, you must be a democrat, if you don’t like political parties, you must be an anarchist, if you’re not a Nazi, then you must be Antifa… this is how polarized people are. You are one or the other, black or white, no shades of grey whatsoever… friend or foe and by that, they mean affiliated the same or an enemy.

This is unamerican thinking, inhumane, beyond contemptuous in nature!