If you’ve read much of this website, you should be acutely aware of my past already, also, unless you’ve been living a rock, you’ve probably heard about the mass shooting in Buffalo New York. The shooter (Who I refuse to mention’s name) was an exponent of racist and antisemitic ideologies, the principle of which is called “white replacement theory,” a theory that rich and powerful Jews are trying to replace white people with people of color. This is encapsulated in David Lane’s fourteen words, “We must secure the existence of our race, and a future for white children,” spoken throughout the whole of white racialist ideologies.

In this ideology, a powerful secret cabal of Jews control everything from government to finance, from cinema to policy, and have an agenda of wiping out white people because of their superiority and replacing them with inferior people of color. This ideology has fueled everything from the Oklahoma City bombing to this most recent tragedy in Buffalo, hate crimes across the globe, as well as antisemitism on both sides of the political fence. White replacement Theory is based on an ideology of fear, that an invisible group of one of the world’s smallest minorities is all powerful and has it out for the white man.

White replacement theory is at the core of most racist organizations, which is why I’ve talked about it extensively over the years. It guides the hatred and fear of people of color, it guides the rampant antisemitism and it it creates extremism and domestic terrorism on both the left and the right in American politics. Let’s take a look at some facts, deep dive into W.R.T. and explore what can be done to eradicate this terrible ideology once and for all!

Let’s start with the fear that drives the ideology, stemming from the fourteen words, and branching off into a belief that white genocide is currently underway. You’ll hear catchphrases spouted by W.R.T. exponents, but none more virulent than “in only white majority countries, do they push diversity.” The thing is, there is no deeper look into why this happens, only a blind acceptance of it as fact.

The many countries where diversity is pressed were colonial powers, who later became more accepting of the indigenous people there and later still professed to become a nation of immigrants. Let’s take the U.S. for example, when we say white, are we talking about English, Irish, Italian, German, Polish, Scottish etc… because each of those distinct people have come here by way of immigration. Each of those “White,” groups struggled initially and were later accepted and integrated into American society et al. This is how America has grown, adapted, and what spurred on the nation of immigrants and diversity that we have today, welcoming immigrants from around the globe.

The initial immigrants from white countries began the domino effect of welcoming immigrants instead of pressuring them to leave and helping them to assimilate into American society. You’ll notice this trend throughout the old colonial powers in Europe as well, each can be relegated to the same dissection mentioned about American society.

Asian nations aren’t like those in the Western world, they had remained closed off for much of their history, whereas ex-colonial powers were founded on the backs of initially slavery, the indigenous, then immigrants, and immigration. Those in America saw the struggles of their ancestors, they saw the hate and libel spun toward them and didn’t want the same to happen to others who came here. Learning from the past is something all of us should do…

As for the claim often espoused in W.R.T. that white births are being largely outpaced by minority births, this is a funny one. The people with the highest per capita birth rate in America are native Hawaiians and pacific islanders, followed by Hispanic and then black, THEN Alaskan natives, then white… Asians were at the very bottom of the list. reference 1

How often do we hear those in the white nationalist movements say “Those Hawaiians man, they are taking over?”

The decline in white births can be contributed to a number of factors, inflation and it not being seen as cost feasible to bring a baby into a relationship, the blending of racial demographics in families, personal attitudes on having children shifting, the fact that religious white couples (especially within certain religious groups that are on a steady rise) wait until marriage to have children, whereas people of color don’t have such a decree, etcetera. There are other factors as well, especially regarding the rise in Hispanic non-white births, such as the immigration rate, Hispanic families electing to have more children than homogenous white families,  interracial familial units, and much more contribute. reference 2

There are in fact, dozens of reasons for this shift in birthrates among all who comprise the landscape of American society, but to examine them all takes time and effort, it’s easier to just believe one of the world’s smallest minorities (ie. the Jews) have a secret cabal to eradicate whites and promote other racial ethnicities. Now let’s review the cabal of Jews trying to slaughter all of the melanin lacking in our society…

Jews comprise 2.4% of the entire population of America, yet account for over 55% of all hate crime victims, this is after a history of antisemitism, pogroms, the holocaust, dispersions, etcetera and it is due to conspiracy theories spreading such as W.R.T. This is not a new thing, it has happened all over the world over the millennia whereas the small minority of people were seen as easy scapegoats and victims for society’s ails and made the focal point of extremists. What W.R.T. does is make it so there is a pyramid of evil with the Jews at the top and every minority seated below them, this gives those who espouse this belief, plenty of enemies, plenty of scapegoats, and a target.

For decades synagogues have had to have security, and Jewish graveyards, centers, and people have all been made targets due to W.R.T. and similar conspiracy theories. Alongside the Jews, people of color, immigrants, and those in the LGBTQIA+ community have all come under the fist of these ideologies, thought of as inferior people who are a part of the evil Jewish secretive cabal’s plans to eradicate white people. In W.R.T. Jews are seen as inhuman and lesser beings, yet have all of the world’s power under their thumb simultaneously… it’s like Schrodinger’s jew!

We constantly hear from those pushing these conspiracies about the superiority of the white race (a social construct oddly enough) yet a minuscule minority of people control everything? Have they seen television where orthodox Jews are portrayed as stick chewing religious zealots? Have they seen the anti-Israel bias in the news and espoused by many left and right-wing members of the American government? As for Hollywood, Gal Gadot came out as a zionist and proud Israeli and immediately the news was full of vitriol and it became harder for her to find work… the same with Mayim Bialik.

Oh, and in W.R.T. and similar ideologies, Zionism is a dirty word meaning racist and world domination, this has infiltrated so much of our society. So what is Zionism?

Webster’s dictionary defines Zionism as; an international movement originally for the establishment of a Jewish national or religious community in Palestine and later for the support of modern Israel.

It is the self-determination of the Jewish people, who were cast out from their indigenous lands time and time again throughout history, to remake Israel today. Jews have always had a presence in Israel and Israel has always been a part of the Jewish Identity throughout Jewish culture, language, and religious practices. As Jews were living in the diaspora, suffering under each nation’s boots throughout all of recorded history, a return to Israel was a dream, especially after losing millions of an already small minority of people in the holocaust. Zionism is a promise to the Jewish people, that “Never again,” will they suffer as they have and that Israel, Samaria, and Judea (Where the name Jew comes from) have returned.

W.R.T. exponents believe in what’s called the “Zionist Occupational Government,” whereas Zionists are seen as a racist cabal bent on global domination…from a country the size of New Jersey and a population smaller than the global distribution of twinkies!

So, what can we, as everyday citizens do to combat this horrific and foolish ideology? How can you and I make a difference in this battle for humanity over inhumanity and hate?

Debunk the ideology, make fun of it, laugh, and come together as one regardless of whether you’re white, black, Jewish, Latinx, LGBTQIA+, Asian, etcetera, and become more united and harmonious. Stop taking party lines and expose this horrible conspiracy on both sides of the political spectrum. Look out for one another, don’t look to fit everyone into a neat little box of stereotypes and tropes. Don’t let one another be victims, stand up together regardless of the differences you have with another who is being victimized, just as the Jews stood side by side and marched with Rev. Dr. Martin Luther King Jr.

We can change this world for the better, but each of us has to first become the change we want to see in it. We have to expose the libels cast at each of us, I know as a Jew, who has been on the other side, books like Henry Ford’s the international Jew, the protocols of the elders of zion, and countless others have all given rise to W.R.T. today. The media is complacent and complicit as well, stop listening to the division, and look into things deeper, as all media today is agenda-driven. Fear your neighbors, fear this, fear that, we’ve become a nation afraid of our own shadows, and fear is the very thing that drives white replacement theory.

In the Torah, we’re taught Kedoshim “and love thy neighbor as thyself – Prov. 8:13” which Hillel elucidates further in the Talmud “What is hateful to you do not do to your fellow” (Shabbat 31a). In an ancient book, these words have never been more needed than they are today!

W.R.T. is being used by political pundits and commentators to push their own agendas now, claiming the other side is using it to push laws and agendas for votes. W.R.T. is wholly antisemitic and to use it to pass an agenda by saying “the other guys are using it,” is utterly disgusting. The Jews have been the suffering servants for almost 3,800 years, and it would seem their suffering makes good political points for those who just don’t care. Worse still, there are some Jews who lack an intimate knowledge and awareness of this dark, deplorable concept of W.R.T. who profess much of the same ideology.

W.R.T. sounds logical, if you take it at face value on the surface, it almost seems evidence-based, but the moment it’s put under the microscope, when any modicum of doubt is held and looked at deeper, the proverbial walls begin to crumble. Once those walls fall down, what the exponent is left with is antisemitism, scapegoating, fear, ignorance, and blood on their hands.

I will end this article by saying, we need to stop making terrorists like the shooter in Buffalo famous by saying their names and plastering their pictures everywhere. Let’s make a habit of showing and naming the victims instead, taking away the power and notoriety that these people desire. To the families of the victims, I give my deepest condolences and pray that the victim’s memories forever be a blessing and that their families find peace. 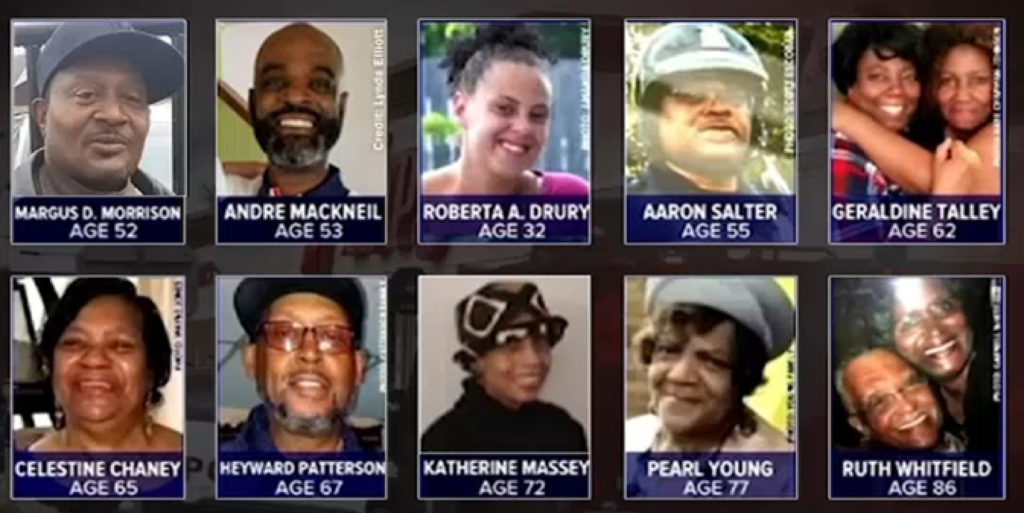 Reference 1: Total fertility rate in the United States in 2019, by ethnicity of mother