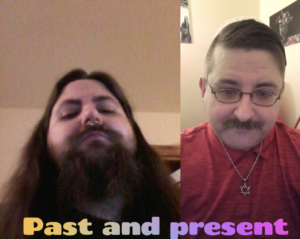 If you’ve read this section to some degree I’m sure you can understand that my past was full of violence, fear, and hatred. I dressed in a way as to elicit fear, I always looked angry (and was) and I was always afraid of the perceived enemies I had, who I’d believed all wanted me and anyone who looks like me dead. I was a sword, sharp and double-edged, ready to lash out and hurt both the “enemies,” and myself. I… was an indoctrinated fool emboldened by extremist ideology.

Since leaving the movement eight years ago, I had worked on myself extensively, as well as working towards healing the pain I once caused to others. This was a healing process, as much as I reached out to heal others, I was and still am healing myself. Two years ago I completely switched up and decided that for all I have caused in my past, I would be a pacifist from here on out. I am big, I was mean, I was well trained and tested in combat, and I willfully decided to change everything.

I didn’t want people afraid of me, so I began changing how I look, cutting the long hair I had since I was 13, removing my septum piercing, and buying new less “aggro,” clothing. I wear a lot of long clothing, even when it’s warm out, to cover my tattoos, I smile a lot, my face says happy and my clothing and look reflect that. I am nothing like the old me and I wanted my outward appearance to reflect the inner me to the world.

I was asked not too long ago if I would use what I know to help combat antisemitism and my response shocked the person I talked to. Yes and no!

Yes, I will use what I know mentally from decades in national socialism to combat racism, extremism, and antisemitism, but no I will not use what I know physically to do so. I am a pacifist today, I solve problems with my words and mind, but this doesn’t mean that I am helpless or useless. I replied to the person’s shock by saying, “I’m a shield, not a sword, if something, anything happened and I saw a person of any color, race, religion, etcetera about to be hurt, I would stand in front of them!”

The person was shocked even more and asked if it was a gun or knife what would I do and I responded, “I would protect those who needed protection, and at most, I would hold the attacker until police arrived. Gun, knife, stick, anything, and everything man can fashion into a weapon, I will take to ensure others are safe…period. I was a sword fashioned out of hate and anger, sharpened by false ideology and fear, now I am a shield fashioned out of love and compassion, strengthened by empathy and humanity. I am the armor of the innocent, taking the road of most resistance against the rising tides of extremism.

Antisemitism is a pox upon humanity, we combat it with our minds, hearts, and voices, our actions speak of love, unity, and togetherness. Antisemitism is the oldest hatred against a group of people, 3,500 plus years, and its actions have led to unfathomable deaths, destruction of graveyards, the desecration of synagogues, and fear amongst all Jews. If I have learned anything since leaving my past behind me, it is that the innocent are often the most victimized and if I can help stop one person from being victimized in my life, I will consider it a great triumph, regardless of my own welfare.