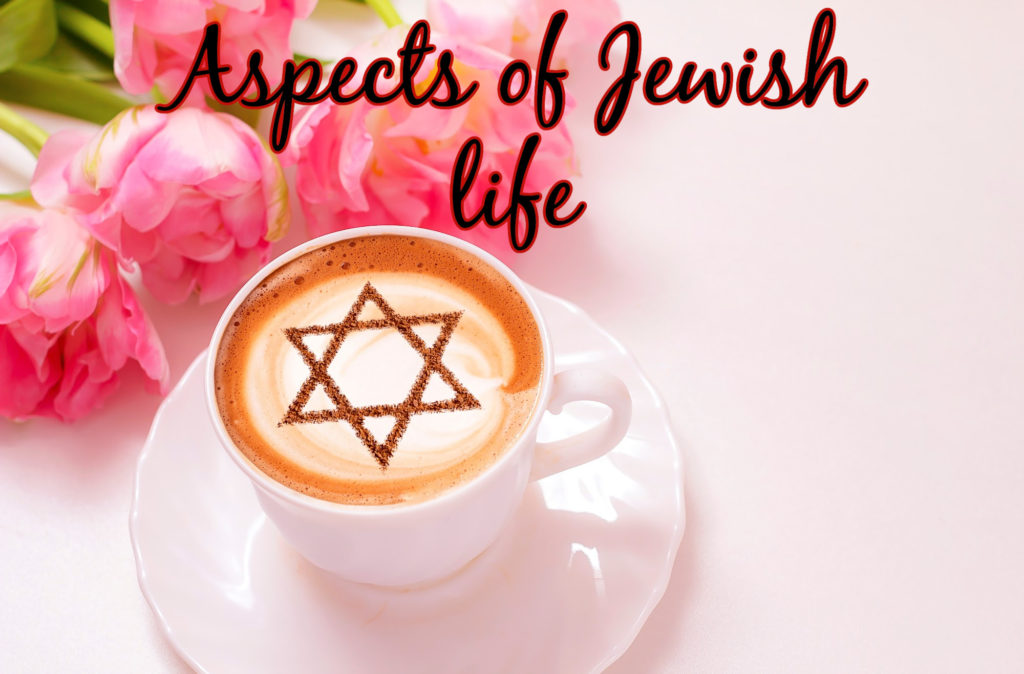 Jewish life, especially for religious (Judaism practicing) Jews, is robust and encompassing in nearly every avenue of one’s world. A Jewish life encompasses;

jews have their own religion, language, customs, foods, practices; these things embody a culture all of their own, so those living outside of the Jewish State of Israel, have their own culture and adopt the host country’s culture alongside it. There is a balance between being a Jew and being whatever the nation is you reside in, but a balance that doesn’t allow for the loss of one’s Jewish identity.

In our day-to-day lives, we try to perform mitzvot, that is good deeds in the world and our works reflect Tikkun Olam or repairing the world. We strive to be a light to all nations, to bring light to all manner of darkness, and to be our brother and sisters keepers. We push for an equal and equitable society, for freedom and justice in all acts… which Judaism is a religion of actions, not candied words.

We honor and keep holy the sabbath/Shabbat, and weekly from sundown Friday till sundown Saturday we relax and spend time in a synagogue and with family. It is our sacred time, when we light candles, drink from the Kiddish cup, enjoy Challah, eat a meal, sing, pray, and rejoice in all things spiritual and Jewish. With the joy of a wedding, we keep the Shabbat and in a way, the Shabbat keeps the Jewish people as well.

We honor the Jewish life cycle, which are the events that shine brightest in our memories, births, baby naming, bris, coming of age, weddings, and funerals. These events are held in the sight of one’s congregation so that we all might celebrate them together as one.

Jews are known as “the people of the book,” meaning Torah, as Jews read and study Torah religiously (Pun intended) and try to live by the commandments found therein. The Torah stands as the complete outline for Judaism’s Ethical Monotheism and the principle doctrine governing Jewish life.

Holidays, like with most people, play a huge part in one’s Jewish life, but to Jews we have holidays, and then we have high-holy days and really the major difference is the holiday’s importance to Judaism. The high holy days are Rosh Hashanah, Yom Kippur, and Pesach/Passover, and all other holidays are considered more minor (Yes even Hannukah, which is only popularized due to its closeness with the commercialized Christmas).

Another really interesting aspect of Jewish life is the Mikveh/collection aka natural body of water for ritual immersion, which is used as a spiritual cleanser. More often, Jewish women will submerge themselves before birth, after birth, after their period, to prepare or celebrate a special occasion, but men also use the Mikveh, as is the case with conversion or major life changes.

Kosher eating is another big deal in Jewish life, however, as a reform Jew, we have our own personal Halakah regarding food. We don’t mix cheese or dairy with lamb or goat, we don’t eat pork, we don’t eat shellfish, we only buy meat that we know its origin and that it was humanely treated in life and at the slaughterhouse. We maintain those things very well, but in more orthodox circles, there is no meat and dairy at all, everything must be prepared according to strict kosher guidelines and baring the Kosher seal on its package.

Jews are giving people as we are commanded to give Tzedakah to others, not out of simple kindness, not to feel better about ourselves, but out of direct commandment to give to causes that need support. Many of the world’s great philanthropists have been Jews, and within every Jewish home, you’ll generally find a Tzedakah box whereas every Shabbat the whole family (young and old) contributes to giving. Kindness, giving, and helping others isn’t just something Jews do to be nice (though most are extremely kind), it is something G-d has commanded of the Jewish people!

Jews are a very prayerful people as well, praying three times a day (morning, afternoon, and night) in replace of the three sacrifices that were given to Hashem during the time of the first and second temples. Jewish people pray at meals, for a safe trip during travel, upon going to bed and waking up, for health and protection for their loved ones, for loved ones who’ve passed on, for peace between people… if you name it, Jewish people have a prayer. Judaism itself is a religion in which living in each moment of life, and gratitude is almost an art form!

Other than those elements mentioned, Jewish people are just like anyone else, we share many of the same hopes and dreams for ourselves and our loved ones as you probably do. We live much as anyone else does in this crazy world… but with a lot more carbs (Jewish food is amazing but often times carb-heavy).